Having recently spent some time in the UK holiday hotspot that is Torquay, I thought it might be beneficial to our readers to report my findings on the various cafes and restaurants I frequented throughout my time there. There were certainly mixed results and unfortunately none of the places I visited would exactly rate as outstanding in my opinion.

Eating out in Torquay – The best and worst

It’s probably best to start with the worst, as the others certainly managed to perform a lot better than Jack’s Waterfront American Diner, which I have to say is probably the worst place to eat anywhere, never mind the UK. Maybe I’m just spoiled by the American Diners I have visited, such as the excellent JB’s in Brighton or maybe it really is that bad.

Our orders consisted of Salmon with fresh vegetables, Cod and Chips, a Grilled Chicken Burgers as well as Fish Bites and a Hot Dog for the kids. In addition we also ordered some milkshakes – I’ll get to those in a minute.

First up the food, which for me consisted of rubberised Salmon, which had no doubt been microwaved along with the fresh veg. To say it tasted like a TV Dinner would be doing TV Dinners a disservice. The Cod and Chips meanwhile were terrible, the fish batter was soggy and the less said about the soggy chips the better. None of the other food really lived up to standard either.

Perhaps the most disappointing part of all was the milkshakes. Sure they looked presentable, but there is no way they had any fresh ice-cream in them as they were actually warm and thin. In other authentic American Diners, your milkshakes are served in a large silver server and are ice cold, as well as being made with quality ice-cream and other ingredients. American milkshakes are also generally quite thick and very filling. Jack’s Waterfront milkshakes were like a weak Nesquik milkshake with a few decorations on top.

If there is one word I’d use for Jack’s Waterfront, it would be avoid.

I didn’t think I’d be choosing a pub as the best place to eat in Torquay, but there you go. The Beacon Quay Harvester is without doubt the best eating establishment we visited, although there are likely quite a few other restaurants we missed out on. In any case, the food and value on offer was top notch. Again I ordered the Salmon and Veg, which was freshly cooked to perfection. Combine that with the unlimited salad, bottomless soft drinks and the fruit salad and fresh ice cream that I had for desert and it made for a great meal.

The rest of the family was just as pleased, with the kids having pasta and garlic bread and my wife also choosing the salmon. My older son had the chicken steak and to top it all off the brownie, the latter of which could probably have been better. 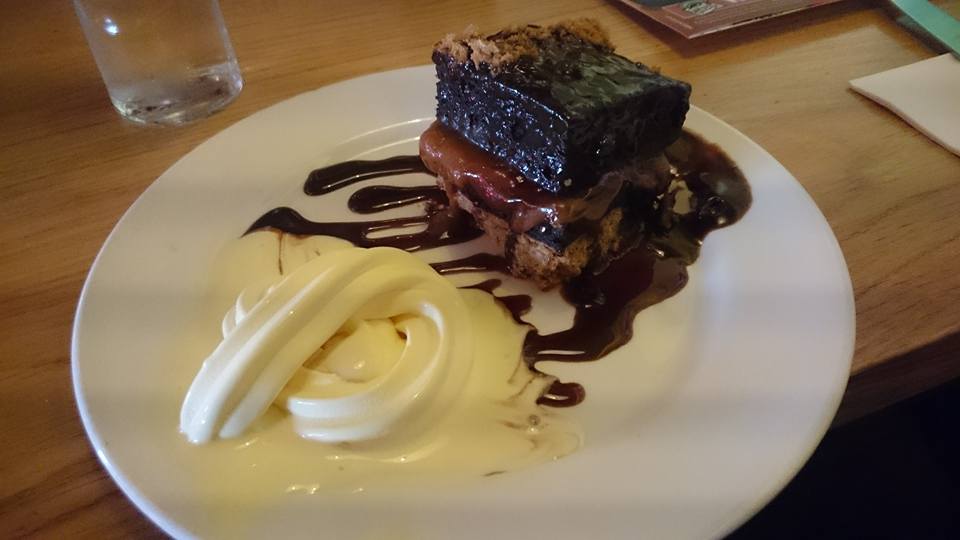 With friendly and helpful staff, a great vantage point on the harbour and of course a bar and rooftop terrace, The Beacon Quay Harvester is a great place to eat in Torquay. It’s no wonder that it’s always popular with everyone visiting the area.

Another eatery we visited was Jingles Mexican Restaurant. We loved this place last time we visited Torquay, although perhaps we were all a bit full by the time was ate, because there was a lot of half empty plates by the end of our meal. It didn’t help that my youngest son fell asleep before he built his own burrito. A nice idea, but an unused one unfortunately. My daughter meanwhile had a jacket potato which she seemed to enjoy. My oldest song shot through his wrap, while my burrito, which was served with rice and filled with a Mexican spicy veg was delicious, although very spicy, so much so that I couldn’t finish it, or perhaps it was the fact that I had three cocktails from the varied drinks menu. My wife had the nachos, although was unable to finish these as they were too spicy for her, so beware, if you don’t like spice.

Overall it was a pleasant enough meal, just make sure you are very hungry before entering. It can be a little pricey too if you add drinks, but no more so than any other restaurants in Torquay.

Italian food is amongst our favourite, so a visit to the popular looking Amici Italian restaurant was always on the cards and to be honest, it offered mixed results. I never thought I would be disappointed with an Italian restaurant, especially when it came to deserts, however I was left hugely underwhelmed, as was everyone else at the table.

I ordered the pizza, as did my oldest son, my wife meanwhile also had pizza. While the base was perfectly fine, there was something not quite right about the mozzarella cheese, which topped all the pizzas. At any restaurant I’ve been to, or even at home, the cheese always has a smooth stringy texture and a nice flavour, however the mozzarella on the pizza’s at Amici just didn’t sit well with me, it was either cheap or something else entirely. It was closer in texture to cheddar than mozzarella.

Things looked like they would improve with the desert, however there was problems here too. It has to be said that the kids loved their ice cream, but the adult deserts were very disappointing. While my baked cheesecake with coffee and pecans looked great, it tasted dry and lacked any real flavour. My wife’s fudge cake meanwhile tasted like powder. Very disappointing really. Maybe anyone visiting would have more luck on a different day.

You can’t go to Devon without having a cream tea, so our next stop was The Singing Kettle. We’d been here before after a swim the last time we visited and enjoyed the huge scone and tea, so a return visit was always on the cards.

The cafe seemed a lot busier this time around, although we were still served in ample time, with sandwiches, milkshakes, chips, tuna and sweetcorn sandwiches and a cream tea all ordered between us. Everything was tasty enough, although the huge scone we had last time was replaced by two smaller scones. Not that there was anything wrong with that, as it was just as tasty as before. The added bonus was that we could choose two different scones, so I had a fruit scone, while the wife had plain. You are only given one pot of tea with a cream tea, so you will have to order a larger tea if you want to share.

Being family run, The Singing Kettle is a very pleasant place to visit for lunch. The food is all fresh, the bread freshly baked and scones freshly made. There’s not a lot to complain about here.

Joe is a computer games and now food journalist. He loves to bake, cook and eat.